Cathy Wilkes was up for a Turner prize. Her gallery installation Non-Verbal (2011) reminds me of a childhood episode. It was the first time I ventured to the bottom of the road by myself and turned onto the busy main road at the bottom, which was out of bounds due to the heavy traffic. After proceeding along the pavement as far as the corner shop I turned back towards the safety of my own road. Suddenly I had the uncanny impression that all the grown up pedestrians walking towards me were all robots programmed to pass me at that particular point, as if there were officials in trilby hats with clip boards and stop watches hidden round corners telling them go so they would pass me at exactly the right time. It was a world stripped of accident. Nothing was left to chance. And though nothing  threatened me, there was an overwhelming sense of loneliness in a crowd. The nearest I have ever come to anything like it was the beginning of The Truman Show, where Jim Carrey is growing up unawares in a completely pre-planned ‘(ir)reality show’. I was the only person in the universe under my own steam.

These folk are a little like this. They certainly put us in a relationship that makes us feel like them. I could believe the artist had read something like Tony Bennett’s ‘The Exhibitionary Complex’ in which one’s identity in a gallery is formed as much by other people looking at us as by the paintings we look at. The figures are pushing prams, which I originally mistook for supermarket trollies and thought of Pierre Bourdieu’s adage ‘the supermarket is the art gallery of the masses’. The fact that the figures are mannikins looking at the backs of paintings stuck to their faces also links them to shops, selling and portable commodities. There are lots of commodities lying around in a random order, like hoovers do in houses before they’re put away or paintings in galleries before they are hung. Their scattered, careless order contrasts with the symmetry of well-hung wall exhibits and identifies the objects with gallery visitors rather than art works. We’re not sure whether we’re inside or outside, which is a bit like gallery spaces themselves, and these figures aren’t quite dressed properly, like a shop window between displays. Everyone was interested in the make of Kate Middleton’s pram when the baby was born.

Being black, these babies don’t quite belong to their mothers, who anyway ignore them. There is much more to say about this work, and perhaps I will on another day, using a different photograph. 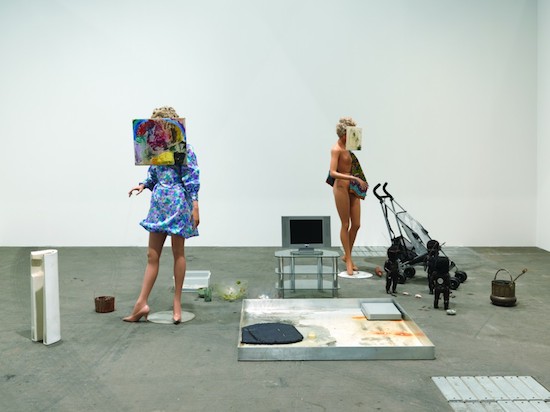 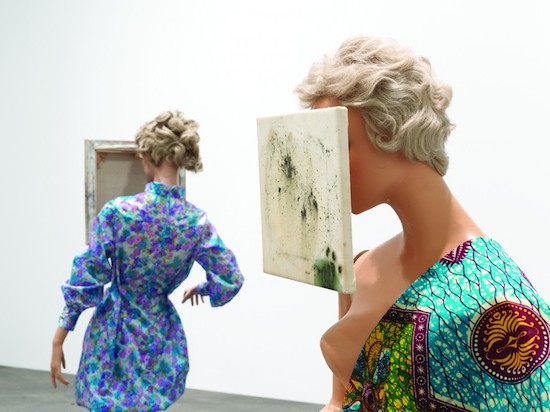