The taxi driver at Newcastle airport was amused to hear the reason for my delayed arrival: fog at Dubai.

Presumably the joke was that only places like Newcastle had fog. It was a bright Sunday afternoon, at about 4 pm. We put the bags in and started off on the half hour trip to Trevelyan College, Durham University. He’d been holding a printed sign that must have used a lot of ink, where everyone else’s was hand-written: Professor Richard Read, as if he were me and I were a complete stranger. He was about my height and looked very English. He had a brown coat and a beard that might once have been ginger but was now wizened and the funny thing was that the hair around his mouth, on the moustache above and the beard below was white except for the very tips, which were minutely blackened, as if he’d been eating liquorice or drinking cocoa or something. Odd.

He was very confident and treated me in his Jordie accent like a complete equal, which was a relief. When I told him I originally came from Wolverhampton he said I didn’t have an accent so I told him that my mother had cudgeled me to prevent me ever getting one and he roared with laughter. We were friends after that, but I was a bit suspicious. He worked for ‘Carefree Cabs’ but he eventually revealed that he would probably be taking all the fellows from the airport, and could name some of the people who worked for the IAS (Institute of Advanced Studies, my host). Was he a ‘plant’ by the IAS to make a first assessment of me?

Sheer paranoia. He could have been a military man at some stage, having an erect bearing. He was very careful to tell both sides of every story so as to conceal his politics, which I suppose was only being polite. His father had gone down the mines but got out of them after joining the army and would never allow him to go down. All sorts of communities had lost their jobs (when Thatcher closed the mines) but what kind of a life was mining anyway?

We passed Anthony Gormley’s Angel of the North, the figure standing on the hilltop with aircraft wings massively outstretched instead of arms. I thought it was magnificent, especially as the motorway curved round beneath it. He didn’t seem to mind it but was more interested in explaining that it was originally funded to help elevate the depressed brother town of Gateshead, but instead became the Angel of the North which went against its whole purpose. I didn’t see why, and indeed someone I spoke to today who lives in Gateshead (the nice part, she said, so it must indeed be a dump) said she liked the aura that the title gave as an entrance statement to all that is Northern. He argued that the trees we were driving past should be thirty feet lower so as to show the Cathedral we were approaching to be advantage. It is indeed magnificent, balanced on its precipitous river bank. He uttered one unambiguous value judgement as we approached the student union beyond the bridge and at the bottom of the long road up the hill that passes through the rest of the university.

‘It’s built by the same bloke who built your Opera House, but whereas he did a good job there, this is an absolute disaster, just ugly grey blocks doing nothing, an absolute disgrace.’ I really liked it but decided it was best to keep my opinion to myself in case he burnt my head off. He wasn’t going to change his mind and clearly thought this was one opinion that no one would disagree with. Even so, he managed to be even-handed about Utzon too – did a good job on your Opera House. (Actually, why would he like that but not this?)

We bantered on, I can’t remember what about, and as we approached the college he started joking about wives, for I’d explained that mine was arriving in six weeks time.

‘You’ve got plenty of time then. What you do here stays here.’

‘I’ve heard that one before, and anyway, she’ll be here and winkle it out of everyone.’

He roared with laughter and as I shut the passenger door to let him take off, he laughed so loud that a jet of yellow flame about a yard long shot from his mouth and flattened itself against the passenger window. I was so startled that all I could think of was why it didn’t set fire to the plastic around the window or the felt on the roof, but as he roared off I saw what make it was and all was explained. The brand name on the back made it clear he was driving a Hyundai Asbestos. 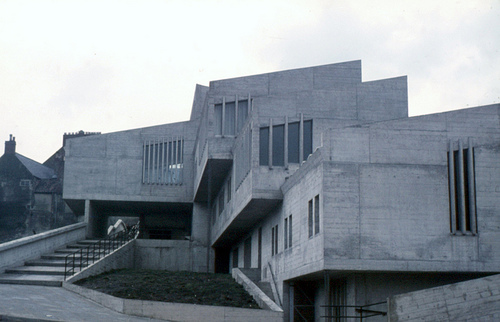 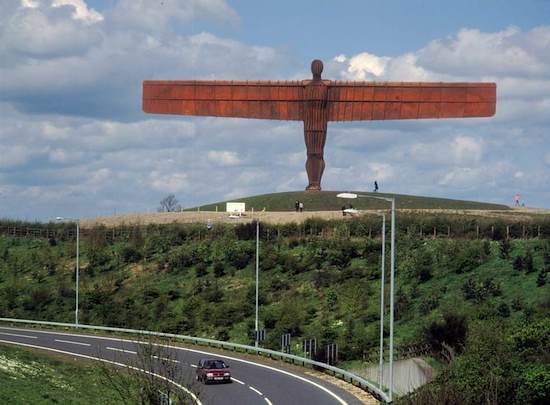 Anthony Gormley’s Angel of the North